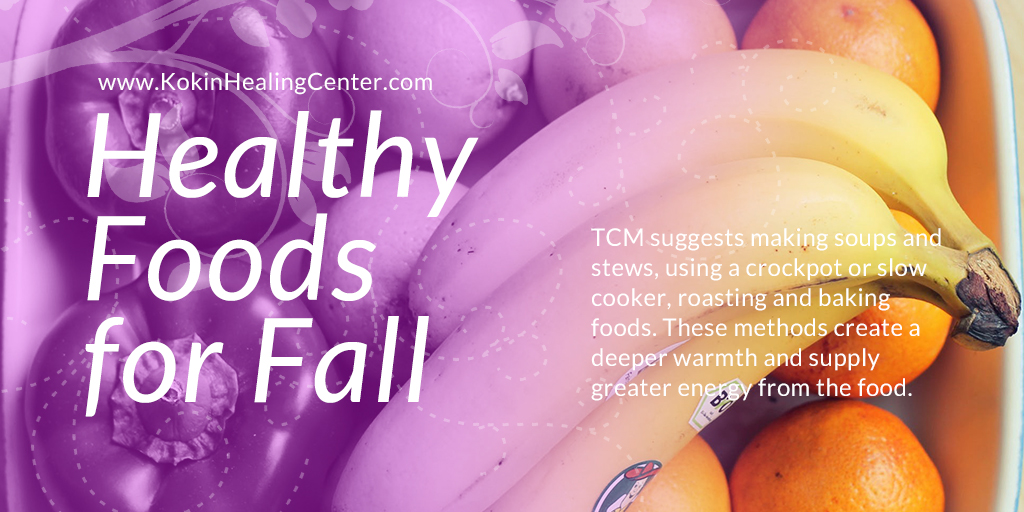 The season of fall brings cooler weather and shorter days. As with any season, the world adjusts accordingly. Plants begin to go dormant, animals begin scrounging for food to store to get them through the upcoming winter months and humans start winterizing everything.

As fall descends on the land, it reminds us we need to start cutting back on the numerous cooling foods that are consumed during the summer months. Things like raw foods, salads, juices, and fruits should be decreased because they can create too much cold in the body, according to traditional Chinese medicine.

There are many facets to traditional Chinese medicine and nutrition is one of the most important. The ancient Chinese observed what took place in nature and followed those cues accordingly. So when the season changed to fall and the amount of daylight decreased and the temperatures cooled, the Chinese began to eat what was available. This is what it means to “eat for the season.” By eating according to the season, we can avoid many illnesses and diseases. If we continue to eat raw, cold foods during the cooler fall and winter months, then we set ourselves up for digestive problems, colds, sinus infections, and even painful joints. When a person eats seasonally, they will inevitably notice that certain foods are no longer abundant or available. During the fall, one should fill his or her cupboards with dried foods, heavy grains, seeds, roots, and squashes. In TCM, these foods help move the body’s energy or qi (pronounced “chee”) inward.

Fall is also a time to slow down. This means that we should cook food for longer periods of time on lower heat. How we cook food will affect how the body tolerates it and how the energy is used. For fall, TCM suggests making soups and stews, using a crockpot or slow cooker, roasting, and baking foods. These methods create a deeper warmth and supply greater energy from the food.

Foods that are nourishing to the lungs are very important during fall. Since many people get sick during these months, lung tonifying foods can be very beneficial. This includes foods like ginger, onion, garlic, pears, walnuts, miso, navy beans, almonds, asparagus, broccoli, apricots, bananas, apples, plums, and grapes.

The drier weather can also cause chapped lips, a dry nose, itchy throat, rough skin, and even dry stools. To counter these issues, it is recommended to eat foods that promote the production of bodily fluids, such as nuts, seeds, pears, pumpkins, honey and a traditional Chinese porridge known as congee.

When we follow the cues given to us by nature, we can maintain a very healthy existence. Ask me to learn more about eating according to the seasons in TCM.