4 Beneficial Winter Herbs to Grow and Use! 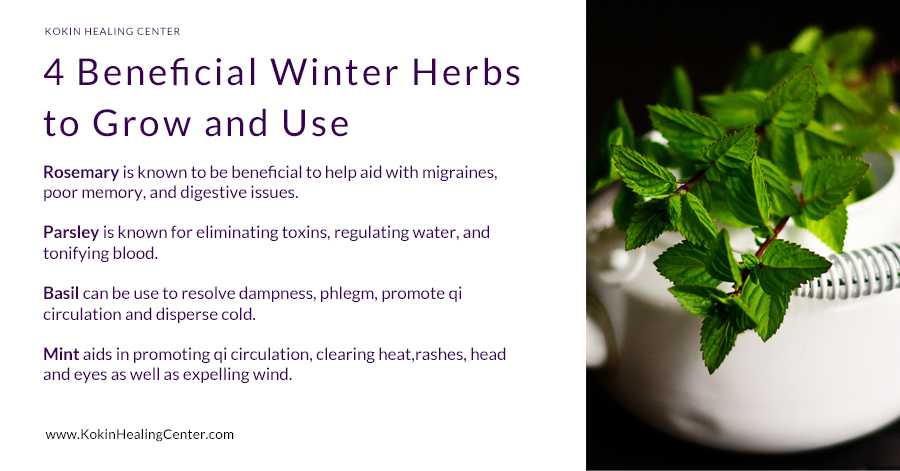 Depending on where you’re located geographically, it may be that time of year when it’s nearly impossible to keep a garden thriving. That being said, hope is not lost for a winter herb garden! Even if you don’t consider yourself to have a green thumb, the following herbs are hardy enough to last through harsher growing conditions.

Herbs that tend to thrive more in winter climates include Rosemary, Parsley, Basil, Mint and Thyme and are also highly regarded in traditional Chinese medicinal practices.

Being a hardy perennial herb that generally takes 14-21 days to germinate, this plant will thrive year-round even in colder temperatures and is cheap to replace if it does parish for whatever reason. This herb should be started in flats roughly 10-12 weeks before the last frost, be grown in plenty of sunlight and have adequate soil moisture (but not soil that is soaked). Eventually, they will need to be transplanted for continued growth.

Rosemary is known to be beneficial to help aid with migraines, poor memory, and digestive issues among other various ailments. In Traditional Chinese Medicine (TCM), Rosemary is said to treat wind-damp-cold, resolve phlegm, and tonify yang. It also enters the Lungs, Spleen, Kidney, Heart and Liver.

Pair this herb with roasted garlic, lemon and olive oil to drizzle over chicken for a fresh and filling entree.

Although Parsley tends to grow more slowly over the winter taking nearly 2-4 weeks before it even germinates, it blooms continuously to give you a fruitful supply of herbs. Because it’s a slow-growing herb, we suggest planting plenty of it to ensure you have enough to last over the winter. It grows best in moist, fertile soil.

In TCM, Parsley is known for eliminating toxins, regulating water, and tonifying blood. It’s also known for entering the Stomach, Bladder, Kidney and is warm in temperature.

Prepare this herb with garlic, olive oil, and lamb to indulge in a savory delight.

If you live in a climate that has limited sunlight during the winter, such as the pacific Northwest, this annual herb may be slower to grow but generally takes 5-10 days to germinate. It thrives more when it’s directly seeded versus being transplanted and is not drought tolerant and does not do well under the stress of heat.

Sweet Basil is the most common type of basil used and makes a delicious snack when paired with mozzarella, tomatoes and a drizzle of your favorite balsamic dressing.

We recommend planting this herb 6-8 weeks before placing it outside in early spring, as it can withstand some freezing but not much and thrives best in partial sun. Be sure to plant it in its own pot as mint will take over the entire planter.

Mint’s aromatic, pungent and cooling properties enter through the Lung and Liver. It also aids in promoting qi circulation, clearing heat, rashes, head and eyes as well as expelling wind. It’s also been known to reduce digestive irritations such as irritable bowel syndrome due to its antibacterial, anti-inflammatory and anti-fungal properties.

Add mint to your chamomile tea with a splash of lemon for a tasty winter beverage.