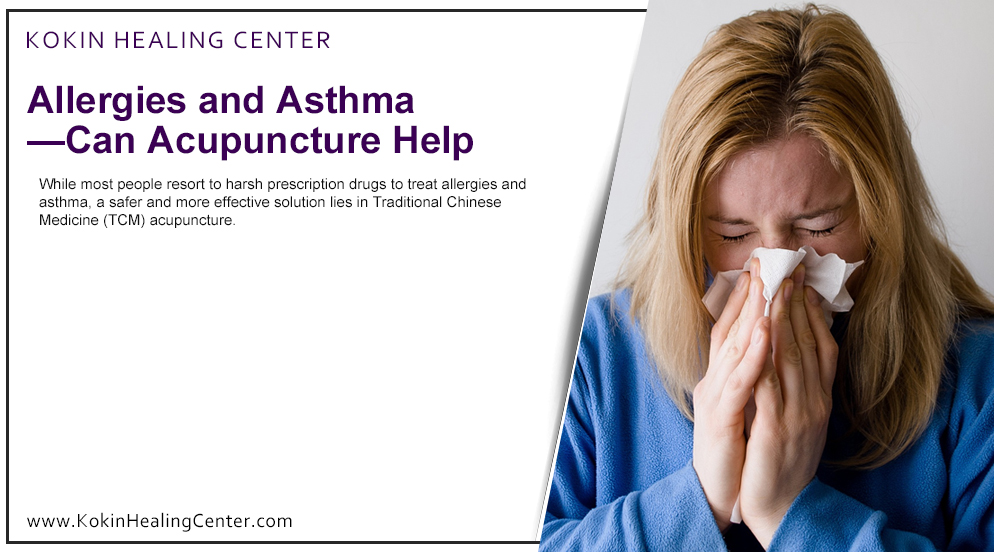 Now imagine having to take all of those breaths as someone with asthma, wheezing, feeling like you can’t fully inhale. That’s the case for approximately 1 in 13 people in the United States who have asthma. Maybe you’re one of those people suffering!

Do you suffer from allergies or asthma? If so, you aren’t alone. It’s estimated that more than 26 million Americans have chronic inflammatory disease asthma, while more than 50 million Americans have nasal allergies. While most people resort to harsh prescription drugs to treat these conditions with awful side effects, a safer and more effective solution lies in Traditional Chinese Medicine (TCM) acupuncture.

Some people might turn their head at the thought of treating asthma by placing small needles under your skin. However, this ancient practice is believed to be effective in the treatment of numerous respiratory disorders.

Several studies over the past decade have shown that when patients with asthma receive regular acupuncture treatments, they have fewer asthma attacks and less labored breathing. Some studies show an even more significant improvement when acupuncture treatments are combined with Western medical treatment, as acupuncture is an incredibly safe, natural, and effective complementary treatment.

A study conducted by the University Medical Center in Berlin explored the efficacy of acupuncture as a treatment for seasonal allergic rhinitis (seasonal allergies). Over 400 patients were divided into three groups. The first received proper and regular acupuncture treatments, the second received a similar treatment however the acupuncture needles were not placed in proper acupoints, while the third group was only allowed to take antihistamines. This study was able to conclude that the group receiving proper and regular acupuncture treatments reported the greatest relief from symptoms as compared to the other two groups.

Other studies have looked into acupuncture for the treatment of eczema. Atopic dermatitis (eczema) is an itchy rash that can be caused by common irritants. Though this study came to the conclusion that acupuncture did not work well to prevent eczema, it did however significantly reduce itchiness and pain in many patients who were experiencing outbreaks.

The World Health Organization (WHO) even lists asthma as being “a condition for which the therapeutic effect of acupuncture has been shown but for which further proof is needed.” This doesn’t necessarily mean that acupuncture will cure your asthma, but it can help alleviate the symptoms and reduce the frequency of flare-ups.

Acupuncture involves the placement of fine needles in specific points of the body, known as acupuncture points. The idea behind this practice is that placing the needles in these areas will restore the body’s flow of energy (Qi). When Qi becomes stagnant, it leaves the individual susceptible to disease and illness, which is why it’s important to keep it moving throughout the body. Professional acupuncturists often treat asthma by using acupuncture points found in the Lung, Stomach, and Kidney meridians.

Acupuncture may also help those who suffer from allergies. Allergies are the result of the immune system’s wrongful identification of what it believes to be a foreign invader. When you are exposed to an allergen, your immune system may view the substance or pathogen as being a foreign invader, at which point it responds by manifesting symptoms like sneezing, runny nose, itchy eyes, etc.

By restoring the body’s Qi, the immune system is given a helpful boost of energy that allows it to properly identify what’s a foreign invader and what’s not. Whether your allergies are minor or severe, you should consider seeking the services of an acupuncturist. It’s a safe and painless process that can reinvigorate your body and mind, alleviating the symptoms of both allergies and asthma. A study published in the journal Annals of Internal Medicine found acupuncture to offer greater relief of allergies when compared to both antihistamines and sham acupuncture.